How to prepare your E-Liquid

HOW TO DILUTE LIQUIDS, AROMAS AND NICOTINE BASES

How to dilute liquids, flavoring bases and nicotine The constituents of the e-liquid can be mixed in varying percentages according to personal taste. For example, a base consisting of 50% glycerol, 40% glycol and 10% water could be used, and a small part of concentrated aromas in the proportion of 1:10 could be added to the overall base thus obtained; however it is not infrequent that even fewer components are used, even only 2 constituents and rarely even only one (typically 100% glycerol).

propylene glycol or E1520 a drinkable and injectable edible food and pharmaceutical additive, used to lengthen or dissolve other substances, is widely used due to the absolute absence of carcinogenicity or genotoxicity demonstrated worldwide by numerous studies [3],

glycerol, E422, a natural constituent of oils and fats naturally present in the human body, is an edible and injectable vegetable food and pharmaceutical additive, usable in the medical field as a laxative or anti-hypertension, in the cosmetic field for creams and soaps for its moisturizing properties and emollients, in the culinary field at the base of cakes and pastry chefs

In the table below you will find information for the preparation of your vape bases where for NICOTINE BASE we indicate the 10 ml bases with nicotine and for LIQUID QUANTITY and FINAL NICOTINE we mean the final result of mixing products. 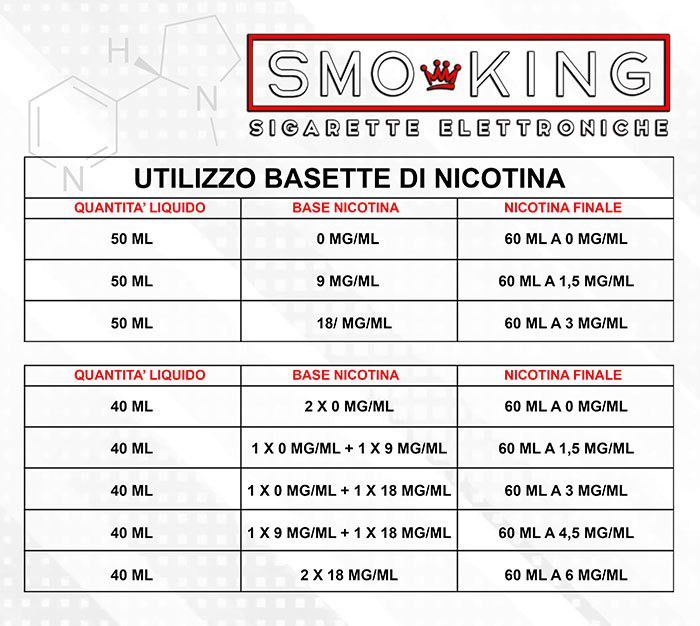 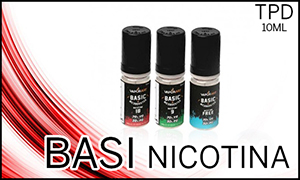 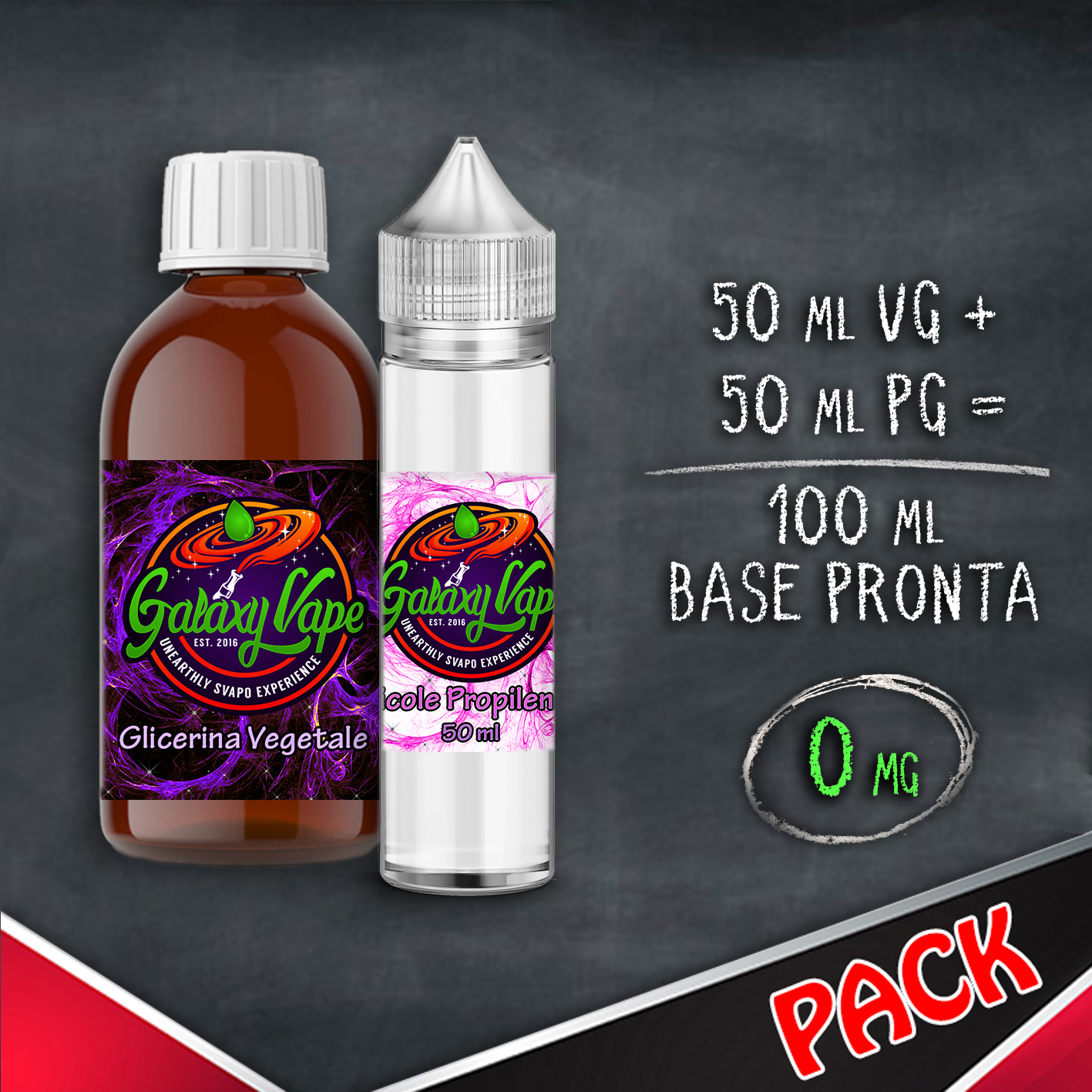 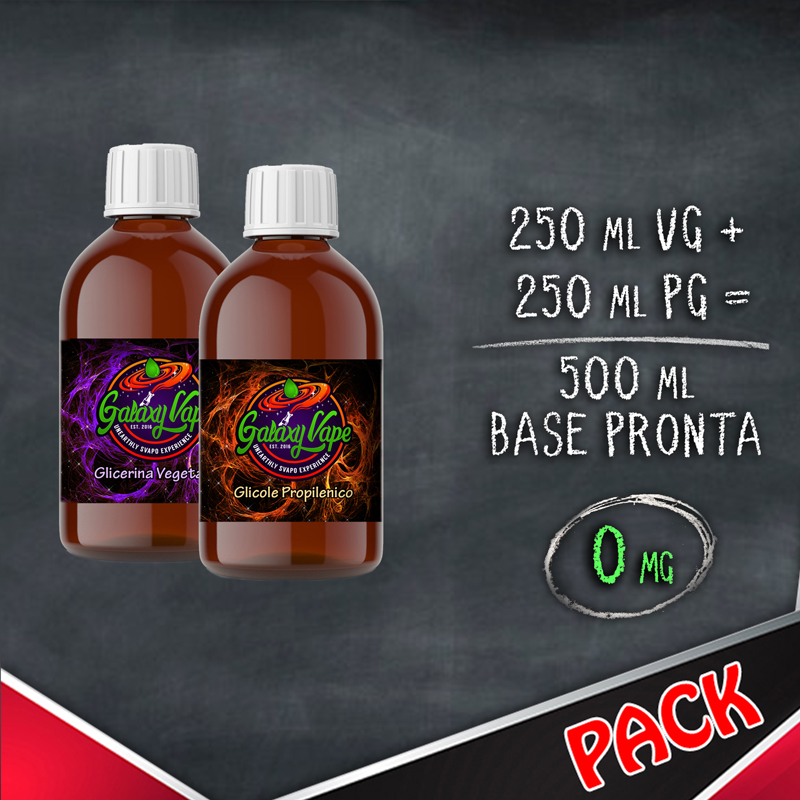 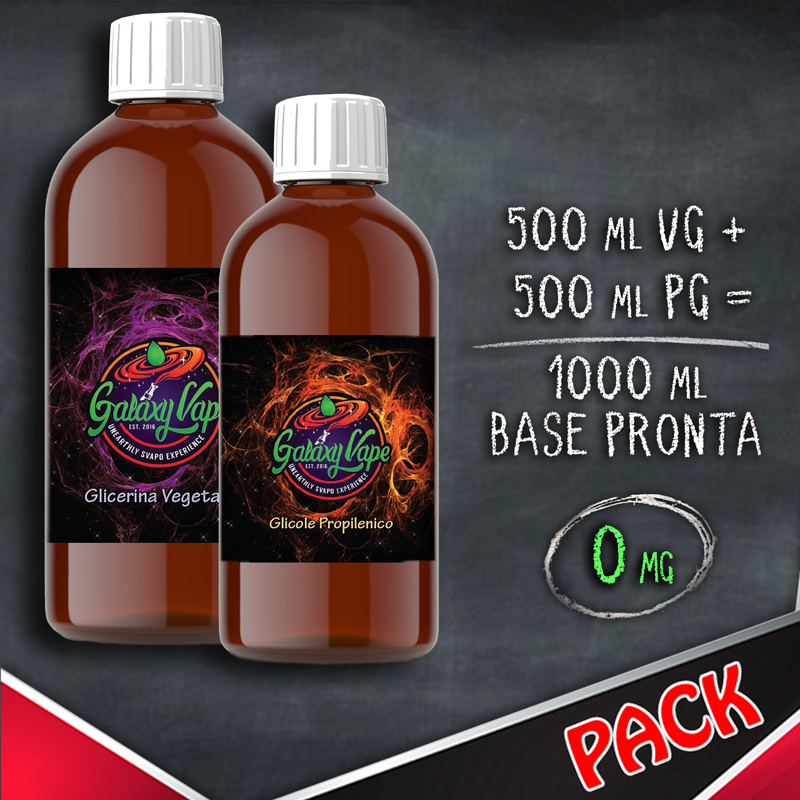 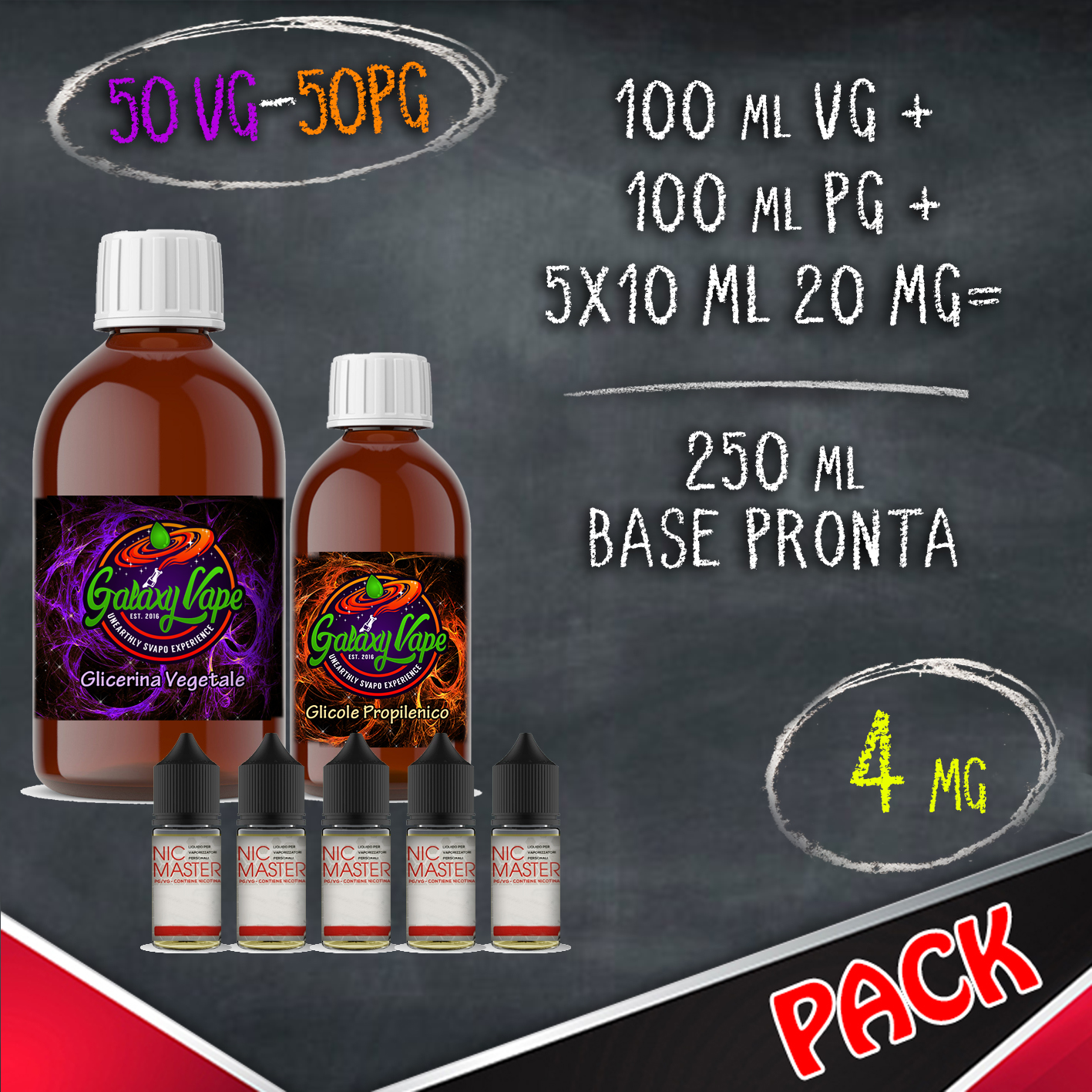 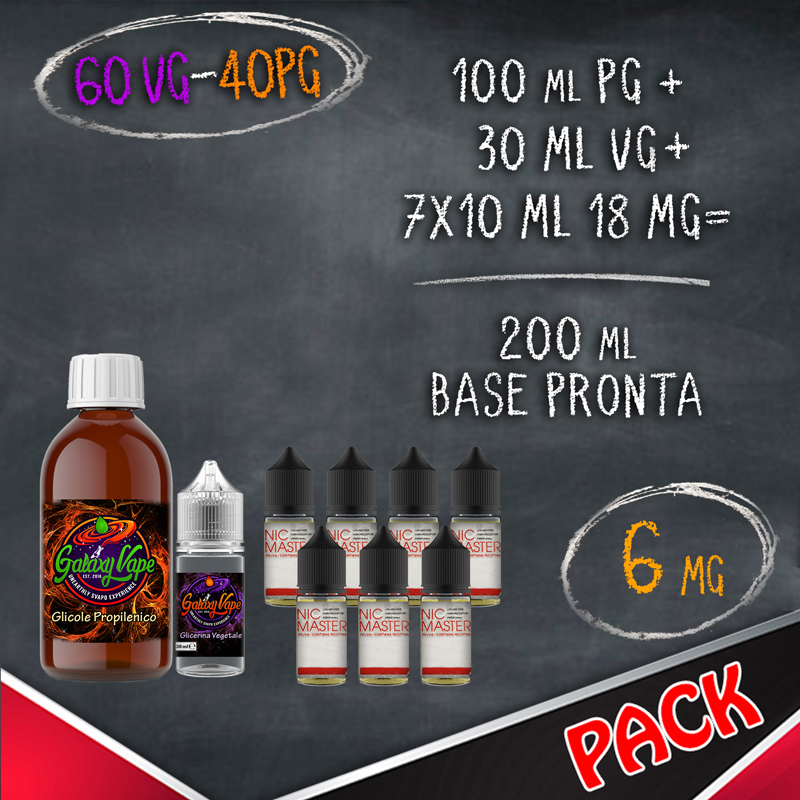 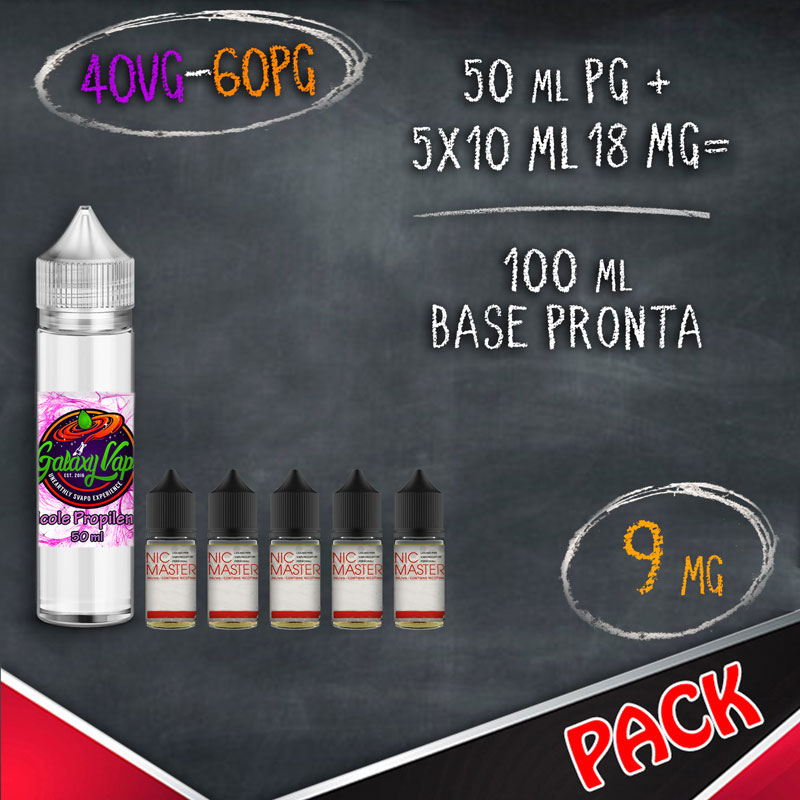 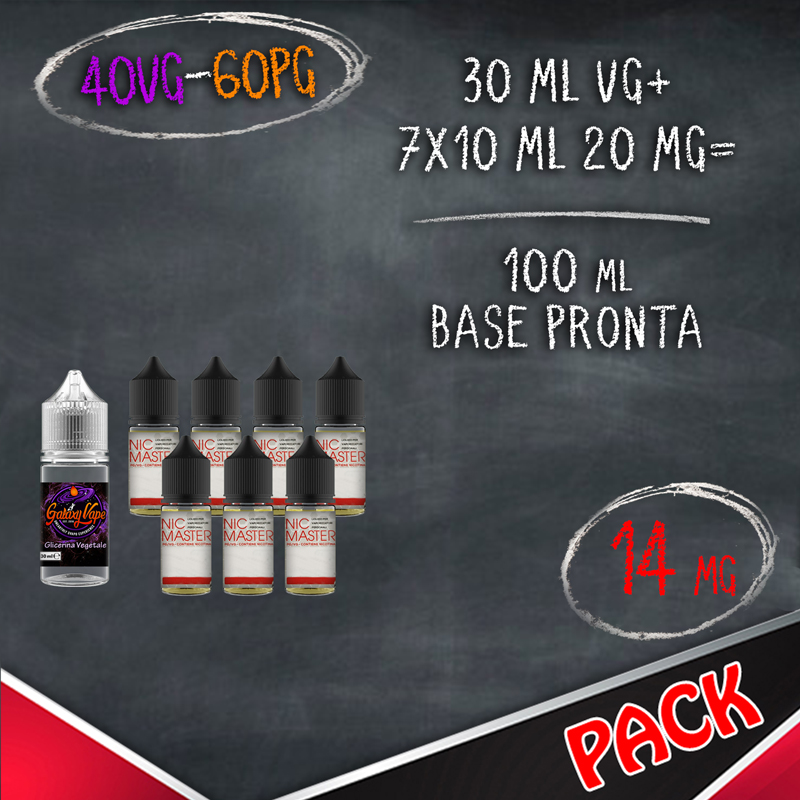 Triple Concentration Aroma and for this reason it cannot be used as it is but must be diluted before use. A 20ml Pg Aroma supplied in a 60ml bottle. The aroma must be mixed with 30ml of Vegetable Glycerin to obtain your Liquid for Electronic Cigarette. Then add a 10ml Nicotine Base to achieve the desired strength.


Concentrated Flavors need to be diluted with the Neutral Base to create your Liquid for Electronic Cigarette. To the created Base, just add Nicotine, if desired, and at that point mix the Concentrated Aroma.

It is an odorless and colorless liquid, clear and viscous with a sweetish taste, highly hygroscopic and miscible with water, acetone, and chloroform.

as a solvent in many pharmaceutical preparations, in formulations for oral, injectable and topical use
as a humectant in medicaments, cosmetics, foods and tobacco products
as a food additive labeled with the initials E1520
as a vehicle for fragrances
to produce polyesters
as a base for defrosting liquids
as an ingredient in massage oils
in hand sanitizers, antiseptic lotions, and in saline solutions
in smoke machines to create artificial smoke for use in firefighter training
as an ingredient, along with wax and gelatin in soap bubbles
as a cooling agent for beer and wine in refrigerated fermentation tanks
as a solvent used to mix the developing reagents in photography
as a fluid in hydraulic presses
in cryonics
as an emulsifying agent in angostura and bitters
in liquids used in electronic cigarettes together with vegetable glycerol and water
as a coolant in liquid cooling systems
in veterinary medicine to treat ketosis on farms
VEGETABLE GLYCERIN

Glycerin is a component of lipids and phospholipids or glycolipids, from which it is obtained by hydrolysis or transesterification. When the body uses its fat reserves, it first breaks them down into fatty acids and glycerol, the latter being transformed into glucose in the liver, becoming a source of energy for cellular metabolism. At room temperature it is a rather thick, viscous and sweetish colorless liquid; the presence of three -OH groups makes it miscible with water in any proportion. Industrially obtained as a by-product of soap preparation, it is used in the production of syrups, creams for pharmaceutical and cosmetic use, as well as as a food additive, and as a product for the creation of liquids for electronic cigarettes identified by the initials E422. It is also a reagent used in the synthesis of more complex organic compounds. In wine it gives roundness to the flavor. It is used in the production of liquids for electronic cigarettes. Liquid glycerol is also used, with 2 parts distilled water, in the solution for stage smoke machines. Glycerin exhibits excellent solubility properties for tannins, phenol and boric acid. If present in a high percentage it also has a preservative action and is sometimes added to aqueous solutions. The caustic action of some compounds (for example phenol and iodine) is lower in glycerine solution. Due to its viscosity, glycerin solutions are better prepared by working hot. Glycerides are remarkably hygroscopic and must therefore be kept in tightly closed containers.